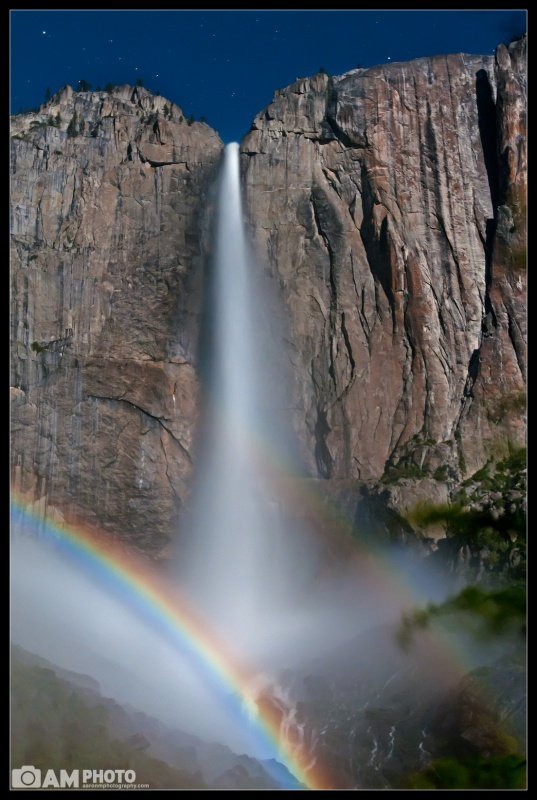 My photo buddy, Willie, has been waiting for about a year to capture another moonbow over Yosemite Falls and this week turned out to be the moonbow week We decided to take half a day off from work and left after lunch on Tuesday and drove up to Yosemite. We grabbed dinner, packed our gear and started hiking up the Upper Yosemite Falls Trail. Its a grueling 2 mile hike up 1,000 feet to the first Yosemite Falls Lookout and we got to the lookout with plenty of time to spare. Apparently we werent the only ones to have this idea as there were several other photographers already there and several more arrived after us.

About 30 seconds before I took out my tripod another photographer grabbed the spot I wanted Doh I ended up finding another spot, up on top of a small rock cliff that worked decently enough. I had some trees to contend with but got a decent enough composition without any trees. My spot was also much drier than where my friends were shooting from. The wind picked up at night and was blowing water from the falls all over us. I constantly had use my micro-fiber cloth to dry the front of my lens.

The battery of my wireless shutter release also happened to die just as the moonbow was starting. Trying to hand hold on BULB mode didnt work so I had to limit my exposures to 30 seconds

I didnt even notice there was a double rainbow in this until I got home The moonbow was REALLY bright — you could even start to see the color with the naked eye (which is usually impossible due to the structure of our eye failing to see color at night).