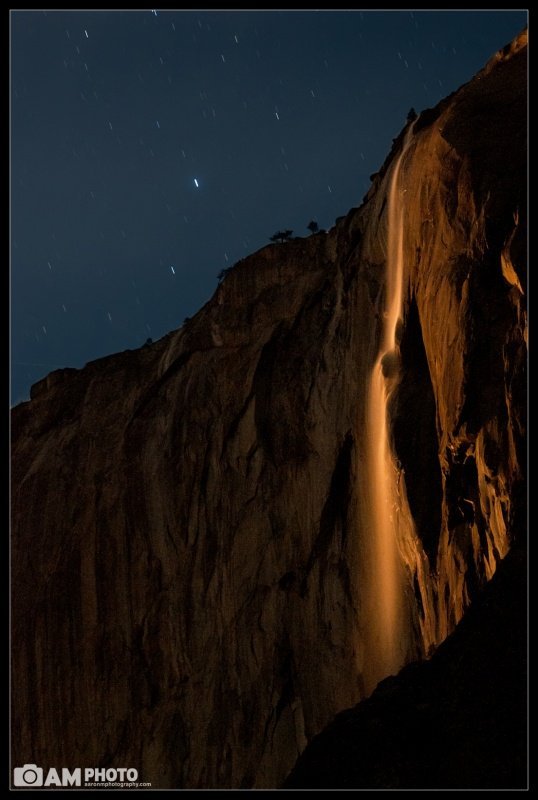 Many photographers know about Horsetail Falls in Yosemite and that every February it lights up into a Fire Falls. In fact, I photographed this exact event in February of this year and it was spectacular. Many photographers, however, do not know that the same phenomenon occurs via moonlight on some rare occasions

On Saturday, Feb 16th 2011 I woke up at 3am and headed over to the Picnic Grounds at Yosemite National Park. When I arrived the moon was really lighting up the falls but the angle wasnt quite right to turn the falls red. After a couple minutes of setting up and figuring out my camera settings all of a sudden the photos started turning orange It lasted for about 10 minutes before the falls were completely dark.

Note that to the human eye the falls appeared white but to the camera it appeared red The human eye has 2 photo-receptors: rods and cones. Cones are really good at detail and color but require a lot of light. They dont work so well in low light (night). Rods on the other hand, are really good at low light but they cant detect color. So at night, in this scene, our eye only saw the brightness of the falls but the camera sensor saw the beautiful color

There is NO saturation change to this. The only thing I did after taking this photo was a small white balance adjustment, some sharpening, and some noise reduction

Id also like to note the difficulties in taking this photo. It was nearly pitch black and the camera cannot focus at all. Additionally, using LiveMode, as I did during the sunset Fire Falls, doesnt work either since the LiveMode displayed a completely black view. I had to set the camera to focus at infinity, took a photo, and then tweaked the focus. I continued this until I got a shot that was in focus. Additionally, since theres so little light I had to bump the ISO wayyyyyy up. Additionally, I had to turn Long Exposure Noise Reduction and High ISO Noise Reduction off or I would have missed out on taking photos of the event. I did the noise reduction later on in Photoshop. Lastly, I had to keep the shutter short just to try to keep the star trails to a minimum.