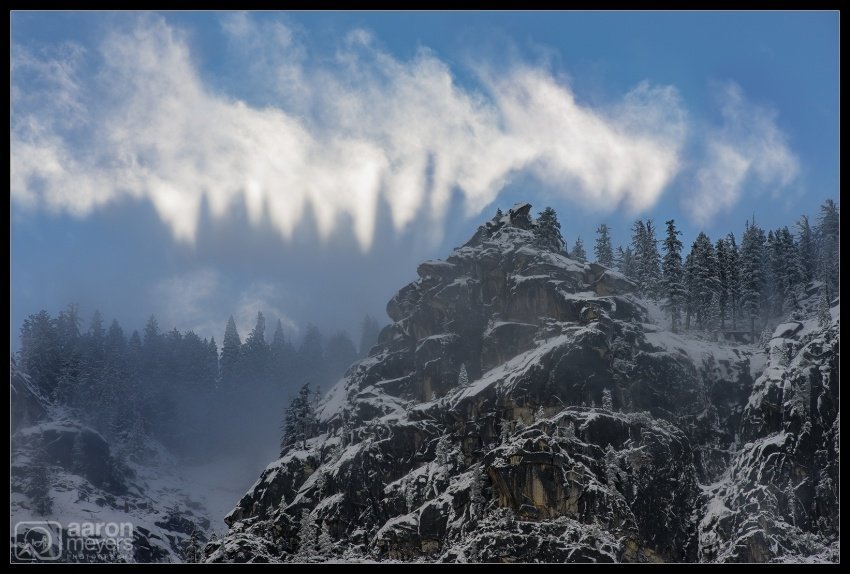 Willie, Zack, and I were a bit crazy and ventured to Yosemite for a weekend in winter wonderland. I had wanted to attend the SmugMug holiday party on Thursday night and we wanted to be in Yosemite by Friday morning, so we all caught a few hours of sleep (or an hour of sleep), and then left at midnight to head to Yosemite. On the way we finally hit the snow-storm that was blanketing the area and it was slow going from then on. We made it to Yosemite Valley about an hour before sunrise and promptly took a nap.

The weather forecast had predicted the storm would break just before sunrise, which would have been perfect for photography had it actually happened. Instead, the storm lingered and all we saw was fog and cloud. After some breakfast, coffee, and hot-chocolate we were ready to head back out and see what we could photograph.

The storm did eventually break and we made our way to Valley View to witness the storm clear. We all took a few nice photos and were ready to head back to the car when we looked up and saw a very crazy scene: the clouds were mimicking the shape of the trees Both Willie and I raced to the car to grab our 200mm lenses and hurried to get them attached. It was then a battle to setup the tripod (or not) and snap away before the clouds changed shape. 30 seconds later and the clouds had blown away and were gone. Such an amazing fleeting moment