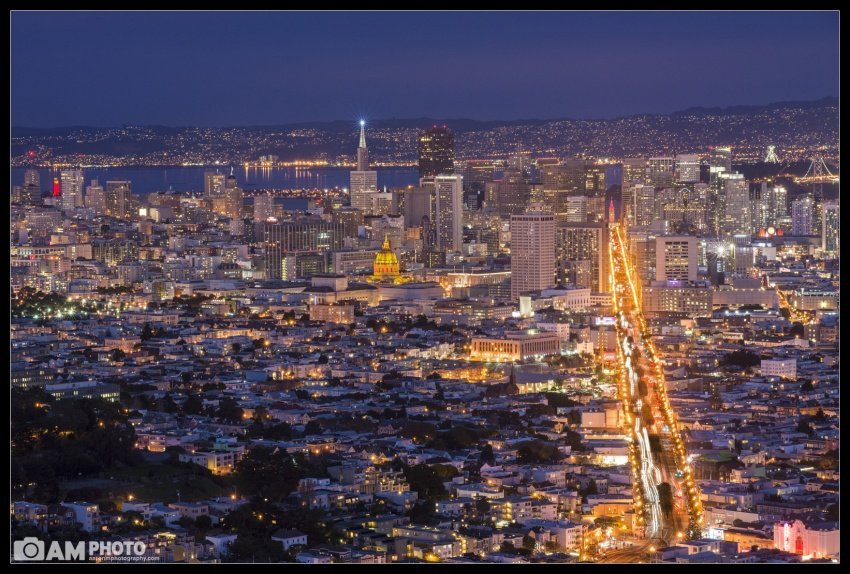 When the San Francisco Giants won the World Series this past year the entire city bathed itself in orange to celebrate the victory. Various buildings lit up the city skyline in orange. When Willie texted me to say that the city was bathed in Orange, Gold, and Red for the 49ers playoff game I knew I had to make it into the city Only there was one hitch: my roommate and I had just invited her parents over for dinner to see the apartment for the first time. With a sigh and If youre not home by 7pm Im throwing your camera gear out the window while you sleep I was granted permission to go

Willie and I made our way over to Twin Peaks. This was my first time here and we arrived early and walked around taking in the sights. There are a number of curvy roads that lead up to Twin Peaks and we wanted to use the winding roads in our photos. The plan was to first stay wide angle and include the winding roads while there was still some light and then throw on the telephoto lens as blue hour started to peak and focus on the colorful buildings.

I made the prediction earlier in the evening that the Beacon might make an appearance tonight and sure enough it did They couldnt turn the crown jewel on at 5pm during the holidays but they could for a sports team Dont question this, I was happy it was on As the sun went down and blue hour kicked in the orange and gold lights became more evident. Blue hour came and went before I really knew it (perhaps it was only about 5-10 minutes long).

I included Market Street, City Hall, Coit Tower, the Transamerica Building, and just a smudge of the Bay Bridge to commemorate the 49ers kicking the Packers tuchases (yiddish for BUTTS) You can also see that the tops of the Embarcadero Center buildings are lit in interlocking red and gold, just to the right of the Transamerica Building. What a neat sight