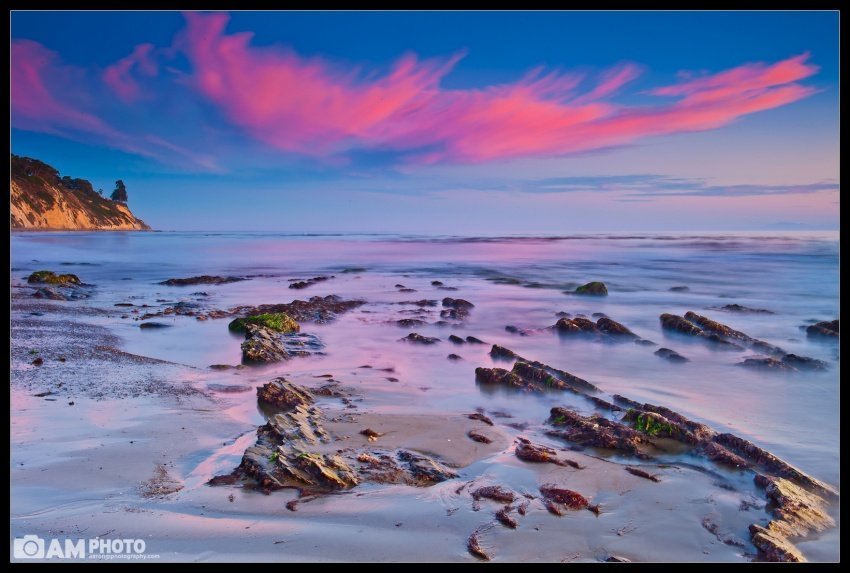 It’s been a while since I’ve uploaded a photo to flickr. It’s also been a while since I’ve had time to comment on peoples photos — I apologize. Between the holiday and work (well, mostly work, since I worked the entire holiday), I’ve just been SWAMPED. I took this photo over a month ago and although I usually edit photos almost immediately, this took me a month to get to!

My girlfriend had been saying for a while that she wanted to do an extended weekend vacation to Santa Barbara, CA. For her birthday I decided to force her to take Friday and Monday off work and I booked a hotel in Santa Barbara for a little surprise vacation for her. We drove down the coast (from SF) on agorgeous Friday afternoon and had a wonderful weekend with perfect weather. On Saturday we went down to ”Hendry’s Beach” as the locals call it (officially called Arroyo Burro Beach) to have a drink and then try to get sunset photos. Unfortunately there wasn’t a cloud in the sky — photos were a bust.

On Sunday I noticed the cloud coverage wasn’t too bad so I left my gf at the hotel and drove over to the beach. I quickly found a spot and setup the camera and waited. Unforuntately the clouds had started to dissipate and the surf where I setup wasn’t big enough to give me a good shot. Just as I was about to leave and call it a night I realized that there was this GORGEOUS U shaped (Bird Shaped?) cloud behind me. I turned around, setup the photo, and took a couple ”sample” photos.

The light was fading fast and I realized this would be a great chance to pull out my new Lee Big Stopper and get a long misty colorful exposure. I setup everything, set my remote timer to a 5 minute exposure, and clicked start. 5 minutes later I looked at the photo and it was completely black! My calculations had shown it should have been long enough — why was it black?! Turns out I forgot to put the camera on BULB mode so the shot was only 30 seconds long. Ick — there went my perfect shot. Luckily one of my 30 second photos (this one) while I was testing the settings and setting up, ended up being a really nice photo. The color quickly faded after my failed 5 minute attempt and I was really lucky to have captured this as it lit up from the sunset.